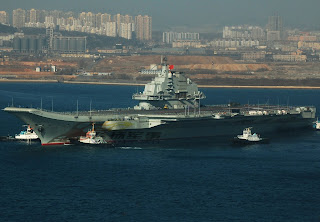 The spokesperson of the Chinese Ministry of National Defense, Yang Yujun has said that Chinese Liaoning CV16 (Ex-Varyag) aircraft carrier is undergoing different tests and People's Liberation Army Navy ( PLA Navy) was able to attain the objectives set for the previous sea trials of the aircraft carrier.


Yang Yujun said that Chinese Liaoning CV16 (Ex-Varyag) aircraft carrier is now carrying out follow-up scientific testing and future testing and training at sea will continue in the future. He also rejected the reports that Russia had refused to sell the arrester wires for the Chinese aircraft carrier. He said, "The report was entirely groundless."

The spokesperson said, "The main equipment for our aircraft carrier, including the arrester wires, were developed and converted on our own."
Posted by Mjaawad