Mig-15/JJ-2 fighter jet of the PLAAF which served during the Korean War (1950–1953) with nine stars painted on it, indicating the nine kills by the Chinese ace pilot, Wang Hai from the 3rd Fighter Aviation Division who shot down or damaged 9 American aircraft. 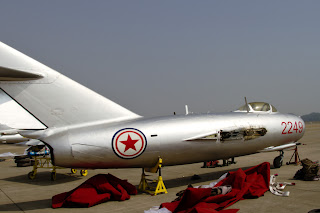 Is that 9 real kills or 9 for home consumption kills?