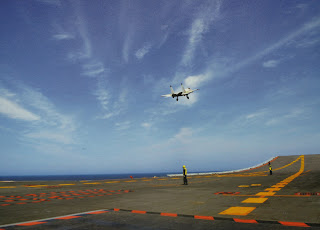 Google Translation of the official story of the takeoff and landing onboard Chinese CV-16 Liaoning aircraft carrier released by the Ministry of National Defense of the People's Republic of China.

14 °, slip jump the deck bow of the "Liaoning ship" identifies a significant, carrier-based aircraft took off from the deck elevation angle, which determines the success of carrier-based aircraft to take off. Even though it is only a small part of the aircraft carrier, but its importance was particularly attractive, and therefore to be regarded as a symbol of the Chinese navy to take off from the sea. 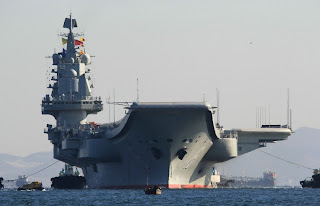 Moment when the helicopter landed on the aircraft carrier deck, giving the feeling of not fall on a ship, but a fall on an island. Only when you witness this monster, you know what the sea giant. Although before reporters can be pumping the carrier to Dali imagined, but step on it real who only think of their own imagination so ill.

This is the early morning of October 29, the South is still warm air micro-smoked, a military airport in the Bohai Bay has long been cold and bitingly. A shipborne helicopter rotor "snort" soon began to turn, the reporter could not help but be boarding the heart beat faster. Not because of the first the helicopter rides tension, but due to the interview task challenging: dozens of minutes later, the aircraft carrier-based helicopter ride, landing at being at sea for the first time after the execution into columns scientific research experiments and training mission, China's first aircraft carrier - "Liaoning ship". 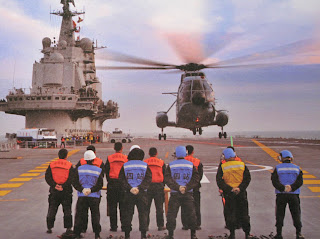 The rotor acceleration helicopter lightweight off the ground. All of a sudden, we are already flowing into the sea and air. Outside the porthole, airports, coastline, sea, clouds constitute a three-dimensional landscape, and from a vessel in the sea have become the screen's most facial embellishment. Suddenly, the body sharply forward, the sea seems to inverted over.

Steep turns of the helicopter crews with nothing like the reporter's heart mentioned throats. Accelerate the helicopter flew to the deep sea, the color of the sea under the wing gradually from yellow to green. Seawater because different water depth showing the different colors of yellow, green, blue, internationally known as a powerful navy "blue water navy". The cross access column of the "Liaoning ship, marking the Chinese navy to accelerate toward the deep blue. 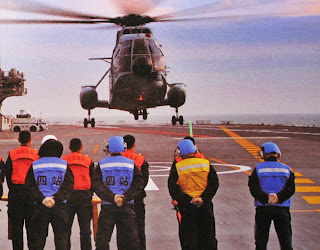 The body inclination angle becomes smaller, the helicopter deceleration. "Aircraft carrier in front!" The pilot motioned us. In the vast expanse of the sea, a rectangular shadow of the ship in front of us. This is so cherished by Chinese aircraft carrier - "Liaoning ship". Look down from a height of 900 meters, the merchant ships or fishing vessels cruising in the sea, gives the impression, but the painter's brush wipe gently over a crescent thin line, but presumably not what a painter dare also painted aircraft carrier into a curved thin line. Reporters visual huge solid posture at least, should be a spill Nongmo!

Establish decline line, adjusting the speed of flight, the helicopter flew to the front of the aircraft carrier landing zone. The huge deck lunged to us gives a strong feeling of constriction. Helicopter landing exactly in the 3rd yellow circle, reporter Taiwan watch hour hand pointing to 8:56.

The double pedal known as "the world's most dangerous 4.5 acres on the carrier deck, the reporter first seen dressed in red, the officers and men of the seven colors of yellow, blue, green, purple, brown, white overalls, They represent the different types of professional. Warships and airport the two elements are superimposed here, here brought together two groups of people from different operational platforms, docking of the two sets of different operating mechanism here, complicated Liaoning ship ", reflects the first-generation carrier here The colorful life.

Moving in the aircraft carrier

The flight from the carrier aircraft one, invading my ship! "Command room informed the aviation sector, sub-sector long Li Xiaoyong spirits pick. Soon, heard the low roar of the carrier-based aircraft in the sky in the distance, Li Xiaoyong riveted on the front of the display, closely tracking the carrier aircraft is in the air to adjust the flight attitude.In this case, the reporter standing Ship Island to witness the spectacular scene: a carrier-based aircraft toward the ship stern roared flying 800 meters, 500 meters ... accompanied by deafening jet engine roar, landing gear touch the deck, like superficial and Swallow Limbo, the end of the deck suddenly his head and pull up, rushed into the sky. In these circumstances, let the reporter recalled the first on the moon, U.S. astronaut Neil Armstrong famously said:

This is a personal a small step, but it is a man, a giant step for mankind.Flaring Reporter mind two words: shocking! The carrier-based aircraft taking off and landing on the aircraft carrier, has long been considered a sign of the aircraft carrier combat effectiveness. Gently "touch" meaningful, extraordinary. It hosts the first-generation carrier sweet and sour with the ups and the glory and the dream: How many sleepless nights, the number of analysis and demonstration, how many times thrilling. Weapon protect the country and sword for the big country, the first generation of aircraft carriers did not live up to the great trust of the motherland and the people, they are struggling with difficulties, and a race against time.The vast sea, the the "Liaoning ship through the waves, and the test and training orderly manner.

Electromechanical sector is the the entire ship most complex, most large department. District team electromechanical Bing Liu Hui where over 3000 compartments of the ship's power supply to protect his helm generator's daily production of enough electricity to supply tens of thousands of small cities. Model miscellaneous equipment variety, pipeline dense spider web, the regional hydraulic system, about 40 km long pipeline.We took the "Liaoning ship after the lift down to the hangar, where resides and preparation of carrier-based aircraft, is the largest compartment of the ship. Reporter saw the a busy aviation sector three Master Sergeant Di Guocheng.

Do not look at Di Guocheng nothing to boast about, he invented the "Di Guocheng wrench, creatively parallel wrench into vertical socket wrench, solve manufacturers allotted wrench to use, easy to fall off, both to improve efficiency, but also ensure the safety , is very simple."My work is not allowed on the deck a little bit of debris, eliminate hidden dangers of aircraft debris inhalation risk!" The ship surfaces soldiers dressed in blue overalls said Li Yang, his day-to-day work is carried out on the flight deck foreign body investigation and cleaning and maintenance. Every day, he and his comrades must inch by inch to repeatedly check, wipe

Exercise through the Indian Ocean wind and waves her during a mission in the distant Gulf of Aden after evaluation, compliance, grow into a qualified female sailors. By virtue of the hands of a 20-cm diameter small wheel at the moment, she took tens of thousands of tons of a monster under control instill obedience.Night of the aircraft carrier is quiet, except for the distant occasional fishing boat lights flashing, the aircraft carrier in the night sea like a sea castle. But the night of the aircraft carrier was not lonely, reporters here fortunate enough to experience its cultural life.8:00 pm, the silence at sea, this "city at sea" has long been a hive. Badminton courts, a fitness playground full of people, and the most popular is a basketball match between the electrical, mechanical and aerospace sectors.

Aviation aviation and success! "Cheerleaders wave after wave of cheer sound atmosphere of competition again and again to a climax, the reporter was infectious, stop and difficult to move. In the field, you might have seen the NBA, but you certainly have not seen the basketball game on the aircraft carrier.In a "downtown" clubs, art lovers are being held to celebrate the party's 48 big victory rehearsal performances. Of the Uighur women soldiers from the aviation sector Mayer once Ali leaves, a year ago they Tage Tianshan, today, they are dancing in the aircraft carrier, as if the incarnation of dance wizard, dance aircraft carrier from the Navy's 5 big arms, 16 the vision and aspirations of the ethnic groups of officers and men. Three saxophonist ensemble "Red Sun shines Frontier", followed by another three trumpeter played "in Beijing Kingsoft. The passion red melodies coupled with the passion of the young officers and soldiers interpretation express carrier the first crew loyal to the party of the pure feelings, release a youthful vibrant.

The colorful life of the aircraft carrier, to enrich the amateur cultural life of the officers and soldiers to disperse the loneliness and pressure of a long sea voyage, to the officers and men to grow a learning stage. "Liaoning ship is like a big school, not only so I learned a professional, but also taught me how to live." The aviation sector female POSTS AND TELECOMMUNICATIONS told reporters.Out of "downtown", came to the cockpit, reporters will turn their eyes to the slip jump in the direction of 14 °, can not help but overlooking reverie: this small elevation angle what magic they - the first generation of aircraft carriers, aircraft carrier will be here across to form The combat effectiveness of a threshold, the completion of the Chinese navy to a rite of dark blue, and interpretation of Navy transformation to build the most wonderful music!