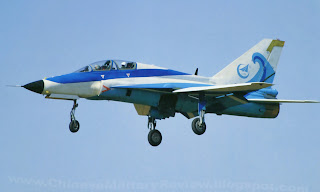 The JL-9G was developed by the Guizhou Aircraft Industry Corporation (GAIC) as a modified version of the JL-9/JJ-9/FTC-2000 (Fighter Trainer China-2000) to train the People's Liberation Army Naval Air Force (PLANAF)pilots for aircraft carrier borne operations. 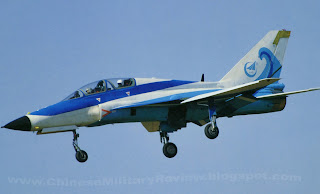 The JL-9G naval fighter jet trainer features strengthened landing gears,tail hook, DSI (Diverterless Supersonic Inlet) and Leading edge slaps and leading edge root extensions.
The People's Liberation Army Air Force (PLAAF) version of the JL-9 has a maximum takeoff weight of 9,800kg, its maximum speed is 1.6 Mach and ferry range with external fuel tanks is 2,500 kilometers. The JL-9/FTC-2000 fighter jet trainer can also act as a light attack aircraft. It can carry upto 2000 kg of weapons including air to air missiles and for ground attack it can carry unguided rockets and bombs.
Posted by Mjaawad

I can't help but love the lines of the Jl-9 Mountain Eagle. I think the FC-1/ JF-17 look great too. I think that they will be of great asset to the Chinese Air Forces ans Navy's. I would love to get a ride in a back seat. I believe that PAC and Chengduo are developing a 2 place version of the FC-1/JF-17. I can't wait.